Dancing at Caledonia. That expression meant relaxing evenings under the stars and trees at nearby scenic Caledonia, 40 minutes away.

An open-air trolley car ride, refreshments at the band shell, and spending time with your special someone – memories of a day gone by!

At left, the view looking east from The Square shows the ceremonial arch commemorating Confederate General Roebrt E. Lee's march towards Gettysburg. Traveling the rails on Lincoln Way East is one of Chambersburg's trolleys.

(Note that both automobiles and a horse-drawn carriage can be seen at opposite sides of the street!). 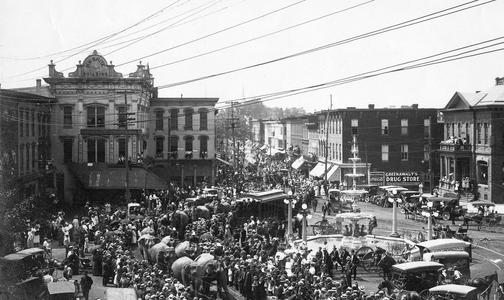 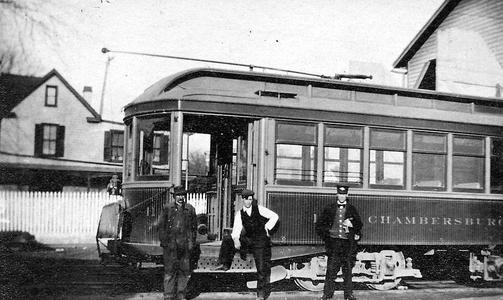 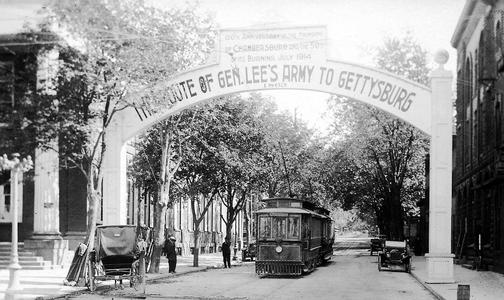 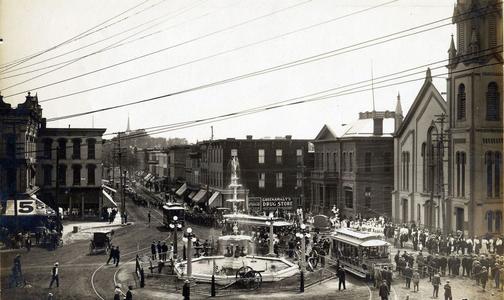 This conductor and two other gentlemen take a break, alongside a Chambersburg trolley.

​Local trolley travel extended into many neighborhoods, and later to nearby towns throughout the county. 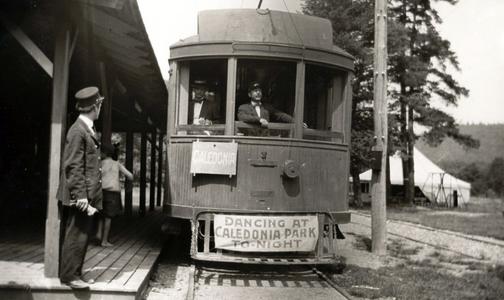 It was (and remains) a bustling seat and center of county government and business.

Shown at right is the square, the surrounding tracks around the fountain and an approaching trolley circling the fountain, a monument to the town's fallen in the Civil War, erected in 1878.

Ever hear that expression, "...When the circus comes to town?"

Well, it was a big deal in the old days for a town like Chambersburg – providing many townspeople their first chance to see live elephants up-close as they paraded past, on the way to their performances at the local Big Top.

That sense of the luxury of travel, the ability to sit and watch the town and townspeople as you pass, the opportunity to go from one end of town, to the other, and even to nearby towns which seemed so far off.

Chambersburg's trolley system was once the envy of many larger towns, and certainly seen as a modern conveyance to those living in towns and villages on the outskirts of the county seat. For mere pennies, one could traverse the downtown area, nearby college, and later, even take a journey to enjoy the fresh air and pleasant scenery of Caledonia State Park.

Later connections to the local trolley system would extend to other towns such as Greencastle and Waynesboro, where further-reaching connections could be made.

These 'modern marvels' of that era, powered by electricity and operating on a spider's web of ever-growing rails, are long gone.

Yet, some wonderful photos and postcards still remain of them in use in their Hey-Day!